Silly rabbits, paint are for humans! 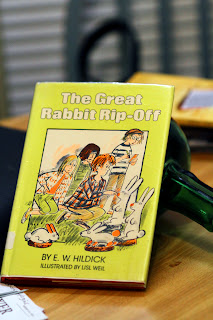 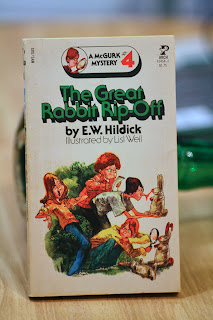 Above, i have posted the hardcover and paperback versions of the 1977 children's mystery "The Great Rabbit Rip-off" in the McGurk Organisation mystery series.

In this book, Wanda enters the office (McGurk's basement) sorely troubled. You see, someone has been going around painting the noses, tails and eyes of neighbourhood decorations-rabbits made by a Donny. Donny is a young man of post-hippie aspect who with his girlfriend and two part time employees makes these rabbits for charity from clay. What troubles Wanda is that she and her big brother have previously pulled a prank with garden gnomes, so her parents think it's them and have summarily pulled their allowances as punishment! McGurk jeers and makes sarcastic remarks because he too (along with Joey and even Willie) also think she and her sibling are the culprits, but a visitor arrives. It's none other than her brother Ed! Ed is a senior in high school, a jock and a straight "A" student. In short, he's the most popular kid in town, even nicknamed Grieg (his last name) the greatest! So when he arrives, McGurk trips over himself to please Ed, and says that he will get right on the case.

Well, McGurk had devised a scheme of paying informants with candy. In an amusing scene, he has his officers split up and hit the streets.  Joey talks to Gerald "Brains" Bellingham (remember that name-he becomes much more prominent in the series-starting with the next book in fact!) and after some haggling (Brains wants the lion's share of the candy, like any self-respecting squealer would) he tells Joey that Burt Raffety is the culprit. He also derides McGurk saying that Burt was bragging so much about it that he would hear it for himself without "paying" informants.

It's true-the others all heard that Burt was the one as well. When they approach him, he freely admits that he did the painting as a lark. He is tickled pink that it also got Wanda in trouble, but when Ed talks to Burt, and tells him that he's in the soup as well, Burt is only too happy to confess to the Grieg parents and clear the names of their kids.

But let me back up a bit. As McGurk and co. were investigating this "crime" they went to "the rabbit factory" (Donny's garage) and spoke with them. Donny and Joanne (his girlfriend) seemed unusually sad, but Sam & Fredie (their employees) were in good spirits. The pair were ex-baddies. Sam was a pickpocket and Fredie a car thief. They had a blast teasing McGurk (pretending that he came to arrest them, and even swiping his ID card (Sam does this now as a joke among friends, but does no stealing anymore))  As Joey is taking notes, he misplaces his pencil. Willie sniffs it out-it got mixed in with some clay that Donny and co. use to make their rabbits. Wanda notes that Joanne's engagement ring is missing and surmises that she and Donny might have had a fight which made them split up. The boys of course couldn't care less.

The night after the puzzle is solved, all the rabbits disappear! They've been ripped off! Much more serious than nose painting, McGurk is determined to solve this mystery.  Donny comes by and says not to sweat it, and that he and his crew are going to replace all the rabbits free of charge. When McGurk gets his rabbit, Willie (remember, he has a super sense of smell) detects the traces of paint remover on the nose. Now the group know that Donny (or his crew swiped them in the first place). Also, it is noted that Joanne has her ring on.

McGurk figures it out. Joanne had misplaced her ring. She and Donny suspected Sam or Fredie (or both) to have backslid back to their old thieving ways, and so were very circumspect, yet sad. Then with the pencil incident, they realised that the ring got mixed in with the clay, so they took the rabbits back in the middle of the night (they figured that if people knew a valuable ring was inside, they might try to claim it for themselves), broke open the rabbits until they found the ring, made new ones to replace the broken, and removed the paint from the ones that didn't need to be opened.

Donny and Joanne were so happy to have been given the idea of where the ring was, that they rewarded the organisation with a clay blob. Inside, it was stuffed with candy! Guess they got their "payment" after all!

Like i said before, these childhood mysteries hold a special place for me-it was my favourite genre as a kid, and even though i did read some adult mysteries (like Agatha Christie) back then, the ones for kids were just the stuff for a young whippersnapper like me. I think you will enjoy reading the McGurk series and see how even trivial things add up to a mystery for the tween sleuths
Posted by Sean at 8:30 AM