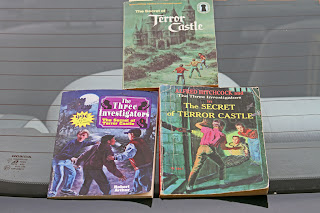 Now don't worry-i will go back to the New Bobbsey Twins, but here is a series that i liked even better-the Three Investigators! Starting in 1964, 43 books were published until 1987, and then a new series started for only about 10 books in 1990. The Three Investigators (or T3i) are three teen detectives kind of like the Hardy Boys. To me, the stories were much more original than the Hardys and usually the trio were called on to investigate mysterious doings that some believed to be supernatural (there was NEVER any supernatural aspect to the stories-it was always bad guys a la Scooby Do that tried to scare people for some villainous reason).

The trio consists of:

-Jupiter Jones, the "1st investigator". Jupiter (or "Jupe" to his friends) is the brains of the trio. Overweight, he isn't as physically active as the others, especially Pete. But here is a note on childhood obesity-even though Jupe is supposed to be "the fat one", the artwork on the covers show him as only being what we would call stocky. I guess in the 60s, there really weren't a lot of people as heavy as there are now.

-Pete Crenshaw, the "2nd investigator" Pete is the athlete of the trio. By no means a caricature bumbling sidekick, Pete isn't as smart as the other two, and sometimes his courage isn't the greatest when they face things that can't be easily explained. However, Pete is loyal, and faithful to his friends

-Bob Andrews "records & research" Bob is a bookish young man (who today many would call a nerd). Since in the early books he is recovering from a fractured foot, he is usually assigned to research. His part-time job at the library helps with this as well (You know, the place people used to go to research things before the internet!)

The first book has Jupe winning a contest to guess the number of jelly beans in a jar. The prize is an all-expenses use of a vintage limousine complete with English chauffeur Worthington! Now that these boys (who are too young to drive) have their own wheels, they start the firm of the Three Investigators. Jupe, an orphan lives with his Uncle and Aunt. They own a salvage yard full of all sorts of interesting junk. Jupe has buried an old trailer in the centre of it with old pipes and refuse which the boys cleverly can enter without anyone knowing about it. This serves as their headquarters

For their first case, Jupe finagles his way to visiting famous movie director Alfred Hitchcock (yes, A.H. allowed his name to be used in these stories-he is the one who writes up the cases for the investigators. After his death, they befriend a fictional writer who does their cases. In later editions of the early books, the director is a fictional name as well (probably because when the early books were reprinted in the 80s and 90s, youths didn't know who Alfred Hitchcock was!) at his Hollywood studios (the rolls-royce with English chauffeur does seem impressive)

The famous director says that he wants a spooky house that he can use in his next film. Jupiter immediately thinks of "Terror Castle", an old house purported to be haunted and formerly owned by an actor of the silent film era who made horror films.

Well, so this review won't get TOO long, i'll say that the trio have many adventures, and eventually prove that:

As i was saying, they prove that, the old actor is really still alive and he is the one "haunting" the old castle. But he really is a nice man-when talkies started, he was out of a job. And since he couldn't afford to keep the castle, he faked his death, and scared any who would try to enter the place. Jupiter helps him make the money he needs to legally keep the castle by having him open the castle to the public. Then he can scare people and they'd pay admission! Also, Jupe suggested he use the old theater room in the castle to show the old reel films he made in the silent era which no one has seen for decades.  Mr. Hitchock didn't get to use the place, but he is still impressed enough with the Investigators that he agrees to introduce and conclude their stories for them


Ah, T3I series! An absolute favourite of mine! While this still is a product of this system with its faults, it was written during a much more moral time. When kids were kids, this series has no foul language, no sexual innuendo, or even intense violence. (I think a sock to the jaw is as violent as i can remember-the only death in the series that i remember off-hand was someone who died of an illness) It is such a shame that even books for young adults these days have such things in them. As far as spiritistic elements, there is nothing supernatural in the series-like i said before, everything it seems so, it is really bad men trying to scare or fool someone.

The Three Investigators always had a "cult" following-it was never as universal as the Hardy Boys and Nancy Drew, which i think is a shame, but it is a lot better known than the "New Bobbsey Twins" series. I will be reviewing these as well as NBT books in the future
Posted by Sean at 8:25 PM