Dogs, and Thieves and Twins-oh my! The New Bobbsey Twins #8-The Secret of the Stolen Puppies 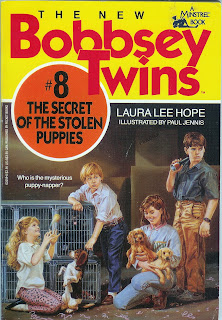 Now i should mention, i am NOT a dog person, nor a pet person in general (besides insects, but that's another story), so this may be why i didn't like this book, but of the really neat first 10 books in the series, to me this one kind of stood out as a stinker. That's not to say it is horrible, it's just that at this point, the bar is VERY high in quality in the series. If this book came out as say, #25, i'd say it was about average with the rest of what was being published.

Ok, so the story opens with Nan, and the younger twins trying to talk to their mom about their desire to own a puppy (of course they waited until Mrs. Bobbsey was busy and didn't mention it until Bert was actually on his way to the fire hall to pick up a puppy, but that's kids for you!)  Mrs Bobbsey is still on the phone planning a party, and speaking with her neighbours about the catered parties they recently held (i guess this is the season for catered affairs since they all seem to be having them right after each other)  As Mrs Bobbsey is still occupied listening to a friend on the phone speak of the ups and downs of their event (the caterers were perfect, but the party ended in tragedy), the kids continue prepping a dog house and making a list of chores. 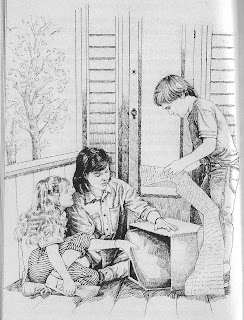 But, soon the Bobbsey kids are startled to see Bert approaching, haggard and out of breath. The puppies have been stolen!

Bert said that he saw mean buggy Danny Rugg and his sidekick Ronald Jameson hanging around the fire hall quite a bit and thinks they might have something to do with this, but the others want to go to the fire house, look for clues and talk to the chief. The twins split up, and the younger twins and Nan comb the fire house while the old dalmatian (who was the puppies mother) watches 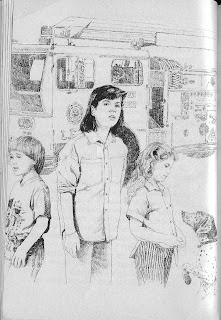 Nan finds a coupon for dog food and remembers that there is an old hermit who feeds the neighbourhood strays. She thinks he clips this same coupon so she wonders if he was involved.  Surly Danny and Ronald act suspiciously, and it seems as if there has been a rash of puppy-nappings lately. The police have better things to do than investigate this, and Mr and Mrs Bobbsey are very engrossed in the party they are planning, so the twins are on their own.

Lakeport being the small town that it is, word gets around about the Bobbseys investigations.  It seems that Ronald and Danny are around when mishaps happen too. Freddie is pushed down a hill in his wagon, and Bert & Flossie are locked in the fire hall. 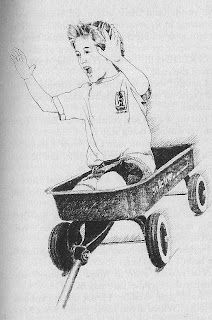 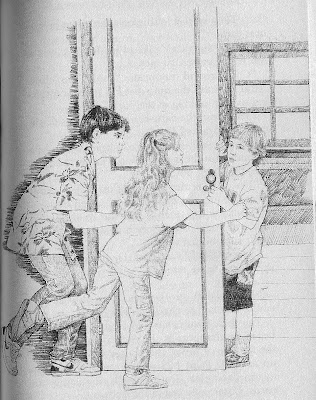 Not finding any clues, the Bobbseys do some research.   They discover that pedigree puppies can cost big money-meaning that the thief might not be bullies like Danny who would pull cruel pranks, or senile older men who like dogs, it's possible adults committed the thefts for monetary gain 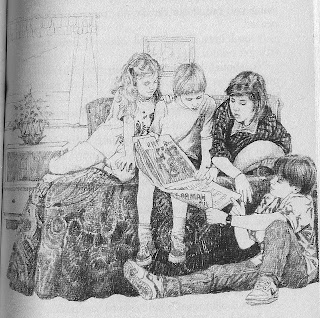 This puts a new spin on it for the twins when they think about the logistics of the thefts. All the dogs were expensive ones, and they were stolen during times when they wouldn't be missed until later.  In fact, it was during fancy catered parties when houses are in the most chaos and the puppies are sometimes locked away.

Finally the day arrives for the Bobbseys own party. As adults mingle, the younger twins talk among themselves and think that the new couple that does catering seem to be in a position to know when parties will be held and could whisk away the dogs. 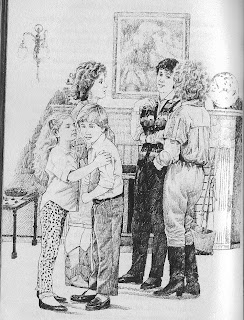 They go to the Mulligans home/office (the caterers), and after a bit of breaking and entering, careful investigation, they find the puppies!  They are almost caught by the Mulligans as they were returning, but fortunately, the older twins figured out the culprits too, and called the police.

The story ends with the twins getting a puppy of their own. A sheepdog though instead of a pedigreed dalmatian.

Like i said earlier, in my opinion, this is the worse book so far of the series. Granted, stolen puppies don't interest me as much as the earlier plots, but also, the book didn't seem as coherent as ones before it.  If the dogs were only stolen during parties hosted by the caterers, it would seem obvious that they were involved and they would have been stopped much earlier. The crooks don't seem too smart, which gives the book that Scooby-Doo feel that i really hate. Sorry, i really don't have much good to say about this one
Posted by Sean at 12:53 AM