Spies and Techno-thieves! New Bobbsey Twins #9 The Clue in the Classroom 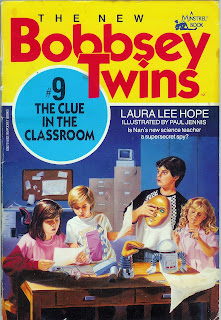 This is another of my favourite books of the series!  This one starts with older twins Nan and Bert walking to school. They notice a tall man nervously looking over his shoulder as he walks across the street. The twins stop behind a tree to watch him, and see a shorter man with spiked hair and a trench coat stealthily following the tall man. Later, Nan discovers that the tall man is none other than her new science teacher!

He seems a decent sort of fellow, but as he is new, he doesn't know how to let the movie screen up that covers the blackboard. When the students help Mr Newman (the new teacher) retract the screen, they are all surprised to see a sinister message on the blackboard directing Mr Newman to "give up (his) plans"! Mr. Newman's pale face and over-the-top reaction shows that he has at least some idea of the meaning behind this message.

The next day, Bert and Flossie decide to go to Mr Newman's house and see if he can find anything. Bert hears odd sounds coming from his house, and sneaks over to the side of the house to investigate. 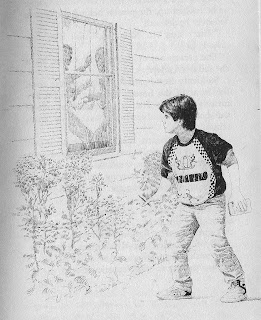 He sees a tall stocky silhouette behind the curtain. It keeps falling to the fall. Then as Mr Newman comes home, he sees his tall figure engaged in what looks like quite a brawl with the stocky one. Bert goes around and knocks on the front door, but Mr Newman answers, curtly assures Bert that everything is all right, and quickly closes the door!

When he rejoins Flossie on the sidewalk, they are approached by a middle-aged woman who says that Mr. Newman used to work for her at DataComp industries. She noticed Bert speaking with the teacher and asks him a few questions. Bert is a bit taken aback, and can't answer most of her questions anyway.  She goes back to her limo and a big guy gets out to open the door for her. They confer briefly as they climb into the car, but Bert and Flossie can't hear much of what they are saying. Then the car drives away. 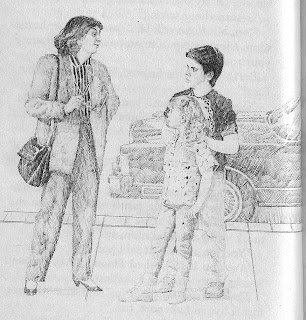 The twins still aren't sure what Mr Newman is up to, but it seems that quite a few people are interested in him!

That night, Mrs. Bobbsey receives a phone call from her editor (she's a part-time reporter for the local paper) that the middle school was broken into and the science lab was turned upside down.  She is assigned to go to cover the story, and the girls persuade Mrs Bobbsey to take them along. 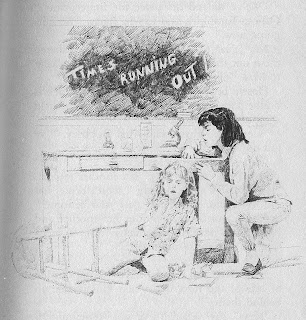 In addition to another sinister message on the blackboard ("Time is running out!" it says), they find a button that looks like it comes off a trench coat

The next day, the Bobbsey girls are walking down the street when they spot the short, spikey haired, trench coated figure who was following Mr Newman when they first got involved in the mystery. He is walking quickly, and doesn't notice something fall from his pocket. Nan picks it up, and sees that it is an employee badge from DataComp (complete with picture). It identifies the spikey-haired man as Rick Aaron, an engineer at Data Comp Industries. When they look up, the man is approaching them with a wild look in his eyes!

Not sure whether to run, Nan and Flossie are frozen for a moment until Mr. Aaron approaches and thanks them for finding his badge.  They ask him if he works for Julie Burns (the middle-aged woman in the limo), and he readily confirms this.  He seems a bit twitchy and nervous, but friendly enough, and the girls note that his coat is NOT missing a button (they are trying to match the button found in the ransacked science lab)

Later, the younger twins bake cookies and go over to Mr Newman's house with the cover that they are selling cookies door-to-door.  Mr. Newman is a bit preoccupied, but he kindly buys a few goodies from them. Flossie manages to see a blueprint titled "LSJ-33" and has a schematic of a robot on it.

The Bobbseys try to figure out what is going on. They think that Mr. Newman must have stolen the robot from DataComp and Rick Aaron, Julie Burns, and her huge sidekick must be trying to get it back. The plans must be so sensitive that they aren't calling the police yet.

They decide that while the boys are searching his house that Saturday, the girls will go to the school (where Mr Newman is doing some extra work) and keep an eye on him and keep him busy.

When the girls get there, they discover more threats against Mr Newman and confide in him. It seems the other way around. DataComp is trying to get ahold of Mr Newman's plans of his new robot invention!  They confide in Mr Newman since if the boys are discovered, they could be in great danger without even realising who the crooks are!  Mr Newman can believe that ruthless Julie Burns might be behind this, but feels that Rick Aaron (an engineer who was one of his best friends at the company) is too honest to be involved in this.

As they drive back to Mr Newman's house, the girls and the teacher spot Mr Aaron lurking around.  Mr Newman decides to approach his old workmate and find out why he has been following him 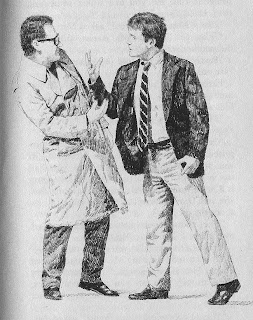 Mr Aaron explains that Mz. Burns told him that Mr Newman stole super-secret plans from the company and asked him if he knew anything about it. Rick Aaron is an absent-minded scientist type, and he decided that his friend couldn't be a crook and was following him to prove to himself that Mr Newman is innocent. They decide that if Mz. Burns is trying to turn her employees against Mr Newman this way, she is probably going to try to steal the robot and claim that Newman stole it from her. They rush back to Newman's home!

In the meantime, Bert and Freddie enter the house and find cool credit-card sized badges. Freddie is examining one, when a robot bursts into the room! "Intruder!" he booms and heads for Bert. 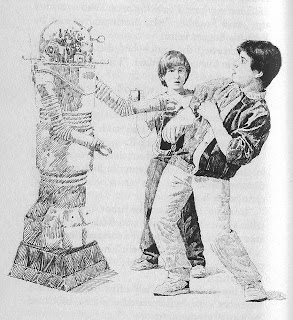 Freddie realises that he isn't being attacked because he has a badge. He throws one to Bert, and the robot stops. They then find a switch and turn him off.

A moment later, Julie Burns enters with Mr. Caroll-her muscleman. They say that they are here to retrieve their stolen property, the robot. Bert notices a button missing on Mr Caroll's coat. As the two adults try to lift the robot, Freddie says that they can just turn him on and command he follow them to the car. They do so, and the robot lifts the two crooks off the ground! The boys tell them that without badges, the robot will capture them, and they call the police to take them away.

The book ends with Mr. Aaron asking if he can work with Mr Newman, and the twins happily declaring another case closed 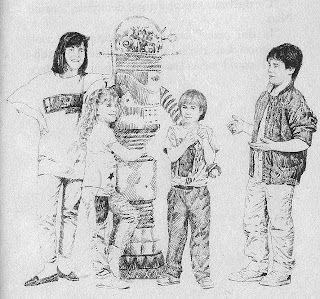 I really like this story. Robots and techie stuff-all the things a young tween boy like me would love as a kid! Also, the story is a fine mystery-with the red herring of Mr. Aaron, it really keeps you guessing as to who the crook is. In fact, for awhile, it looks as if the villian is Mr. Newman himself. I hope you enjoyed reading this review, and look forward to the next book soon
Posted by Sean at 2:37 PM